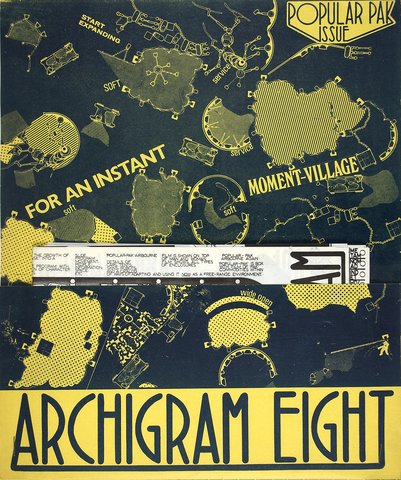 “In seven years the discussion has shifted : first from a search for form to the throwaway building. From this to the notion of the all-happening city and from this, inevitably to the future of the ‘building’ as such. In Archigram Seven the notion of assemblies of programmed or designed objects was beginning to loosen-up so that it is no surprise to us that Archigram Eight is entirely concerned with the problem of direct personal provision : of comfort, facility, satisfaction, enquiry, and above all the effect of all kinds of phenomena upon each other.” 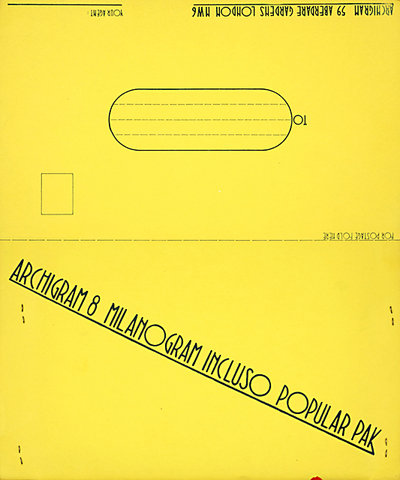 Achigram 8 was distributed as a set of cards. These cards were packaged in a yellow envelope. The futuristic text of earlier issues was dropped and replaced with an Art Nouveau style of font. Archigram 8 revolved around eight terms: metamorphosis, nomad, indeterminacy, hard/soft, emancipation, exchange, response and comfort. Archigram 8 came with a legend that classified what terms each project emphasized. Metamorphosis, nomad, indeterminacy and comfort were the terms highlighted next to Mike Webb’s Cushicle. Both the Cushicle and Suitaloon are featured as separate projects in Archigram 8: Popular Pak. The Cushicle and Suitaloon are not viewed as a single project in any issue of Archigram. A diagram of two Suitaloons combining into one can be found under the heading “Comfort for Two”. This was the first appearance of the Suitaloon in Archigram. The Suitaloon is found in Archigram 8 near an article entitled ‘Hard and Soft-ware’. This article and the Suitaloon had the same goal in mind. They both set out to blur the line between mechanical and biological systems. The Suitaloon was a biological organism and its mechanical enclosure interacting as one with other systems like the Cushicle. The basic necessities found in the Cushicle and Suitaloon are stripped down to a systems of pipes that wrap around the body to heat and protect it, like some form of mechanical exoskeleton. 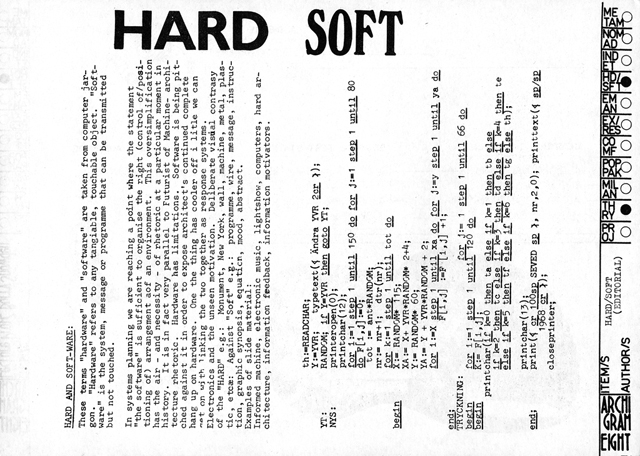 “These terms ‘hardware’ and ‘software’ are taken from computer jargon. ‘Hardware’ refers to any tangiable (sic), touchable object. ‘Software’ is the system, message or programme that can be transmitted but not touched.In systems planning we are reaching a point where the statement ‘the software’ is sufficient to organise the right (control of/positioning of) arrangement aof (sic) an environment. This oversimplification has the air – and necessity – of rhetoric at a particular moment in history. It is in fact very parallel to Futurist of Machine – architecture rhetoric. Hardware has limitations. Software is being pitched against it in order to expose architect’s continued complete hang up on hardware. One the thing has cooler off i litle (sic) we can get on with linking the two together as response systems.”

“When Otto drew a detail of the pneumatic spacesuit, he included human skin as a layer of the outfit. Sure enough, an Archigram project included in Archigram 8 wrapped a combination of a ‘soft’, inflatable form with responsive technology architecture around the body. The notion of the suit as the most basic form of housing was at the heart of Mike Webb’s design for the Suitaloon: Comfort for Two (1967).” 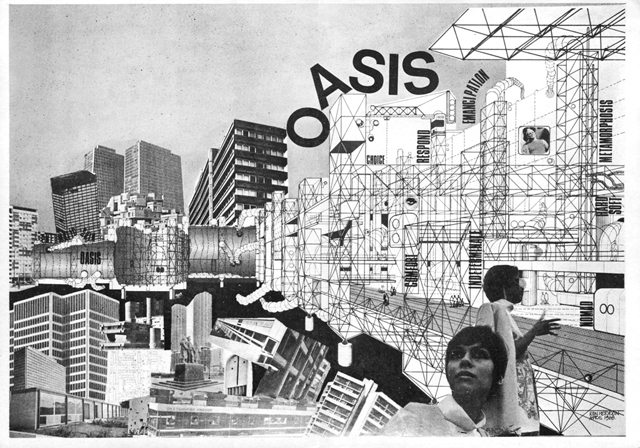 The Suitaloon as depicted in Archigram 8 represents this idea of the home becoming a second skin. It was a project with no definition of inside space and outside space, there was no divide between home and clothing. The Suitaloon was the ultimate in nomadic living, one of the central themes to Archigram 8. “With the possibilities of lightweight materials, Webb proposed an enclosure that was fully transportable, exploited the speed of expansion and deflation, constituted and reconstituted itself at will, like a lung. It was a house that was only as durable as clothing and as natural as a second skin.” The Suitaloon was not to be viewed as a machine for living, but rather as an ever adapting biological/mechanical extension of daily life.