Zoom Issue was the first international edition of Archigram. The fourth issue discussed science fiction, science fact, and space comics. The projects of Archigram 4 borrowed from the imagery of all three themes- all equally wild and imaginative- and especially from the space program.This is the first Archigram issue to feature the word 'capsule' which would later fill the magazines. Furthermore, 1964 was the year the Cushicle was conceived, though it was not published in Archigram magazines until 1968. This issue discussed bubbles, space capsules and Plug-Ins, key to the Cushicle's design.

Archigram 4 has bold graphic images and is the most memorable Archigram magazine. The title "Zoom" refers to the speed of assembly inherent to small, prefabricated forms and spacecraft. Archigram 4 was 20 pages long and staple bound, the magazine's dimensions were similar to a comic. The middle of the magazine features paper pop-ups of a city. All the pop-ups in the thousand or so copies originally produced were hand cut by the members of Archigram. Peter Cook designed the layout of the magazine save the first six pages and cover. Reyner Banham distributed about seventy copies to his influential colleagues in America and greatly increased                                                 Archigram's international reputation.

An essay by Warren Chalk announces the science fiction theme. Various panels from space comics illustrate the essay and emulate a comic book. The essay reads as follows: 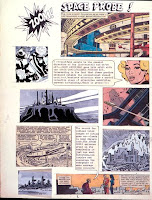 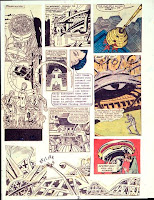 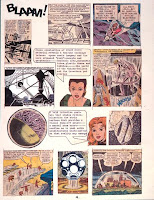 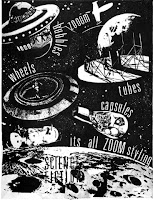 [text]
ZOOM.
A respectfull salute in the general direction of Roy Lichtenstein and we’re off-- ZOOM ARCHIGRAM goes into orbit with the SPACE COMIC/SCIENCE FICTION BIT. Interesting is the fact that these goodies produced outside the conventional closed architect/aesthete situation show a marked intuitive grasp of principles underlying current in-thinking. Which is great-- The search for radical valid images of cities goes on –- leads in many directions. The SPACE COMIC universe great in its complexity is just one such direction, can inspire and encourage the emergence of more courageous concepts.
These SPACE COMIC cities reflect without conscious intention certain overtones of meaning- illuminate an area of opinion that seeks the breakdown of conventional attitudes, the disruption of the “straight-up-and-down” formal vacuum-- necessary to create a more dynamic environment.
Close examination of SPACE COMIC material reveals a two-way exchange between space comic imagery and the more advanced “real” concepts and prophesies--Geodesic nets, pneumatic tubes, plastic domes and bubbles-- the world of thinks--ballon and the inventors pad overlap.
A bold intuitive gesture that eludes rationalization, the strip cartoon kick provides a visual jump-off point-- a mental zoom boost-- enables to push aside architectural waste-matter so that reality may emerge.
The Gap between fantasy and fact narrows—COUSTEAU REALLY ZOOMS see “Underwater Cities” in next Archigram—METROPOLIS ISSUE
In this second half of the twentieth century, the old idols are crumbline, the old precepts strangely irrelevant, the old dogma no longer valid. We are in pursuit of an idea, a new vernacular, something to stand alongside in the space capsules, computers and throw-away packages of an atomic/electronic age.

SPACE COMICS,as Chalk says, represent the overlap of popular discourse, science fiction, science fact, architecture and technology. Bubbles, wheels, tubes and capsules were among the new forms promoted. The most significant project from Archigram 4 is the first iteration of Chalk, Cook and Crompton's Plug-In City. The design was inspired by space age technology such as the space capsules. The form of the structure is scarcely more than the appliances. Overall, Archigram 4 boldly advocates the relevance of the day’s most modern vernacular, which was usually disregarded. These ideas, bubbles, spaceships, technologic environments, capsules and expendability inspired many of Archigram's projects including the Suitaloon and Cushicle. Like the spacecraft, the Cushicle is composed of only a minimal chassis and vital technologies for living. Through and through, the Suitaloon and Cushicle were influenced by the sci-fi preoccupation with bubbles and technology.