The Cushicle and Suitaloon were conceptual design projects by Micheal Webb. The Cushicle was first designed in 1964 and the Suitaloon in 1967. They were part of the many wildly imaginative projects produced and published in the 1960’s by the avant-garde British Architectural group, Archigram.

The group published yearly magazines featuring their eclectic projects. Their ideas were neither feasible nor often built and they held the reoccurring motif of the mobile, personalized and technological urbanity and impacted many later designers. 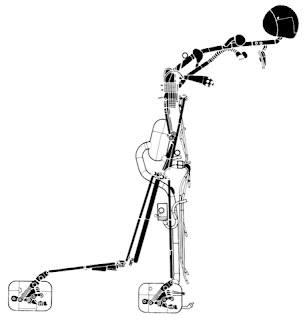 The Cushicle was sort of mobile structure in two parts: a chassis with appliances and personalized apparatuses and an inflatable envelope. The chassis is structured like a spine and would include a heating system. The helmet would contain the radio and mini-TV. Food and water modules could be added to the chassis as attachments. The two skins would be envelopes for the rider, covered with viewing screens. The two could be used independently or simultaneously. Like a car, the Cushicle was envisioned as eventually becoming part of an urban system of personalized enclosures, though it was conceived as usable in any environment. Many drawings were produced for the individual’s Cushicle, though multi-person Cushicles were also part of the proposed urban environment.

The Cushicle was part of Archigram’s preoccupation with mobile urbanity. Webb revived the 1948 idea of the expandable home with his ‘Drive-In Housing’, featured in Archigram 3 (1963). Peter Cook’s Plug-In-City, Ron Herron’s Walking City and the Instant City, all explored the idea of fully mobile cities in Archigram 4 (1964). Modern architecture still common in the 1960's was frequently criticized as unnatural and uncomfortable. In contrast, the Cushicle and Suitaloon sought to be comfortable and imitated organic systems. In addition to the skeletal support system of the Cushicle, the skin is inflated pneumatically. It is a similar system to those within fruits, air bubbles and muscle tissues which hold skin taut or like a bullfrog, which inflates itself with air. The Cushicle aimed to achieve complete comfort with minimal effort and organize the essential comforts of home to be portable anywhere. 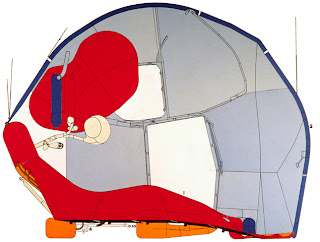 The Suitaloon can be thought of as an improvement of the Cushicle’s membrane, to be a more complex wall surrounding the essential technologies of the house. It holds the advantage of possessing a large cushion, which can be placed against the Cushicle’s armature to form a reclining chaise longue within the personalized bubble. It was conceived as something the rider would wear, proximate to the body’s skin as if defined by the nervous system. Yet, the Suitaloon would be able to be erected anywhere through pneumatic inflation or by simply pushing the membrane into shape from he inside. Furthermore, each suit has a plug, similar to the key to the front door. The plugs would serve to connect to friends’ Suitaloons and create a larger single envelope or even plug into another envelope so the rider could step out of the Suitaloon and leave it clipped up on its own as if parked.

The Suitaloon was Webb’s study on prefabrication, modularity, and minimalism  The style is that of bubble architecture. The style is speculated to have originated from the speech bubbles of comics, which defied gravity yet existed in time and space. The bubble suggests perfect form – maximizing volume and minimizing surface area while being pliable and somewhat formless. It questions minimums and the permanence of shelter in its collapsibility. Only the bare minimum of amenities and appliances, provided by the Cushicle, are present within the Suitaloon. The material proposed was an imaginary, incredibly strong and delicately flexible and completely transparent. The bubble represents the thin boundary between inside and outside- an impermanent, transparent and nearly immaterial one. Webb pursued the limits of immateriality in a following project where the membrane was replaced with an array of tubes blowing powerful jets of air to propel the rider. The Suitaloon, ‘clothing for living in’ was inspired by the prototypes of the space suit. It was designed for many environments, though none as hostile as outer space. Still, the film would react to outside forces while protecting the inside. With minimal appliances and paper-thin walls, the imaginary Cushicle and Suitaloon is a home that teeters on the brink of non-existence. In Archigram 7, he writes, “if it wasn't for my Suitaloon I would have to buy a house.”

The Cushicle and Suitaloon were typically drawn together, with the Suitaloon attached to Cushicle as a single fully outfitted living unit. It is capable of supporting the rider’s full weight in every stage of assembly.

The Suitaloon was first published in Archigram 8 in 1968 as 'Comfort for Two' and exhibited at the Milan Triennale along with many other Archigram projects. The Cushicle was also published in the magazine as a separate proposition. There, David Greene modeled a prototype Suitaloon on an urban sidewalk to show the capacity to be inflated anywhere. The main exhibit was a 18-meter long by 2.9 diameter transparent plastic tube hung just above head height containing surfaces covered with Archigram’s drawings.